Tim, Co-Founder of Galakiwi, traveled to the Galapagos in 2001 on a mission to learn Spanish. He had just spent the last five years working in tourism and was ready for a vacation; South America was the destination. After struggling through several countries with minimal knowledge of Spanish, Tim decided he wasn’t leaving until he learned the language. That decision eventually led him to the Galapagos Islands – a perfect atmosphere to practice Spanish as there were hardly any Native English speakers living or visiting the islands at the time.

He was enamored by the wildlife, the weather and the waves and when the idea to start a tour company surfaced, he was ready for the challenge. In 2005, Tim and Nick began guiding a land-based, island hopping tour.

It’s been over a decade since Tim’s arrival to the Enchanted Islands and he still gets excited when it’s time to snorkel – especially if there are sharks involved! He still helps out and joins the occasional tour, but now spends most of his time behind the scenes making sure that every Galakiwi run trip goes smoothly. Tim currently resides on San Cristobal Island where our main Galakiwi office is located. 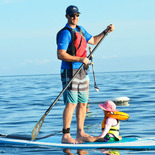