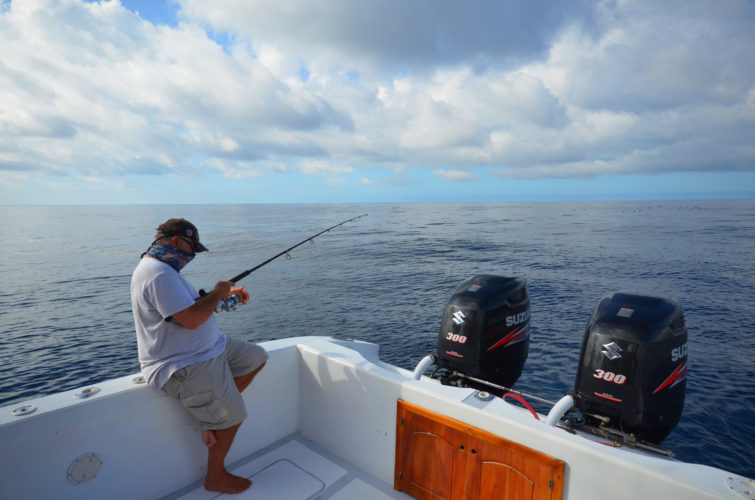 Over the past year or so the newest tourism development on San Cristobal Island has been offering what is called a “Tour 360°”.

As the name implies, the tour does a total circumnavigation of San Cristobal Island. A small, select group of boat operators who have fishing licenses have been given permits and specific times when they are able to operate this trip. As these are run by fishing boat operators, sometimes they are called Tour de Pesca Vivencial, Old Fisherman Tours, or similar names.

Kicker Rock is visited on the Tour 360 trips

Unlike many day trips that are run on tourist-class boats, this trip can sometimes be a bit rougher as the boats with fishing permits vary a fair amount in terms of size and stability. They are by no means rickety boats, they are still quite comfortable for a small group of travelers, but they may not be quite as big as you’d expect.

We mention this because during choppy, windy weather, this extended tour around San Cristobal can take its toll on anyone who is susceptible to seasickness. The tours are all day long, from early morning and returning just before sunset. Look for signs like this to book your Tour 360 trip!

The Tour 360 trips start early in the morning, with permits to visit the Kicker Rock area before any of the other day tour boats get there. This is a great benefit, to be the first there! The tours also stop to do some fishing and visit some beaches that are off-limits to any other tour boats. Because many of the sites being visited have historically only been accessible to fishermen, and not tourists, these new fishing boat “tours” are able to take you to some unique places. The trip can be a great insight into seeing places where the locals went and how they lived before cruise boats and tourism came to the islands.

If you’re spending some extra time on San Cristobal, and the weather is good this may be a fun way to see the “far side” of San Cristobal Island and some interesting landing sites that are off-limits to traditional cruises and tours. Fishing is one highlight on the Tour 360 Trips

Note: Below are places that are often included on this day tour. Things always change in the Galapagos, so expect to visit some, but likely not all, of the places mentioned below! Always ask for details before you book, if you want to visit a particular spot!

Galakiwi does not sell this tour ourselves, but if you are on San Cristobal Island you’ll easily find small shops selling this day trip. Because the tour is relatively new, and the quality of service, meals and boats varies greatly, we can not recommend a specific company to book this tour with. It is best to shop around upon your arrival to ensure you’ll enjoy this trip as much as possible. The San Cristobal Coastline and Kicker Rock. You’ll see all the coastline on a 360 tour!

One thing to keep in mind: this tour visits a lot of places, offering a great variety of experiences. With that said, the amount of time you spend at some places, such as Kicker Rock, may not be as long as you want. If you are really set on experiencing the “best” of Kicker Rock or Punta Pitt, then you should consider booking separate trips that specialize on those places. Spotting wildlife like dolphins, whales, rays and sea turtles is possible on a Tour 360 A Galapagos Fishing Boat. Not quite as comfy as most Day Tour boats, but still nice! Hi, we really enjoyed this tour. Can we fish too? How much does this tour cost?

Hey Joao!
There are artesanal fishing tours available in the Galapagos Islands if you are really interested in that. Fishing during the Tour 360 trips may be possible, but you will need to check with the company here when you arrive. The 360 tours right now are a very good deal, not too much more than a Kicker Rock snorkel tour.

Hi – I’m actually looking to book this tour, but don’t see a reservation on your site. Where do I reserve?
thank you – Alistair

Hey Alistair,
As we mention above, Galakiwi does not sell this tour ourselves, but if you are on San Cristobal Island you’ll easily find small shops selling this day trip.
Enjoy the Galapagos!

Oh my this is definitely a bucket list for me! Truly an amazing way to get in touch with nature. Such beautiful place that I hope to one day visit.