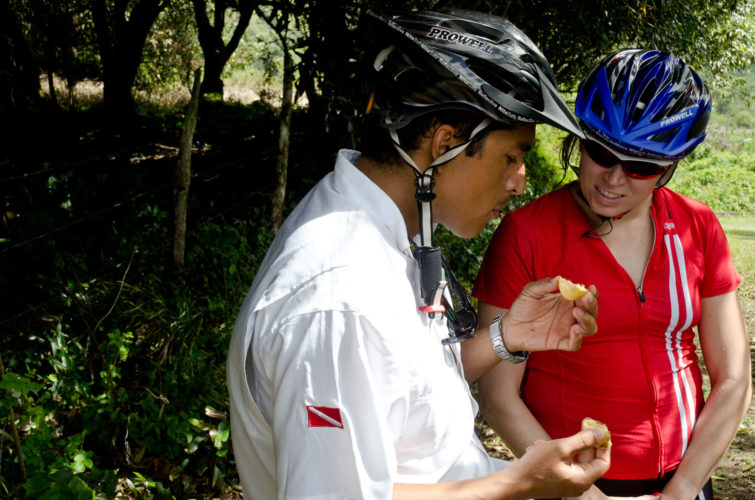 Away from the boat piers and waterfront promenades in the Galapagos Islands are the farmlands, and designated agricultural zones.

Almost every family in the Galapagos Islands owns land that is outside the areas that most visitors ever see. If you’ve taken a ride across Santa Cruz Island to the airport, across San Cristobal to Puerto Chino Beach, or up Isabela Island to Sierra Negra volcano you’ve probably noticed these family farms. Agricultural Zone – Avocado and Fruit Trees in the Galapagos

While fishing remains a big industry for families in the islands (and a cheap source of food), there are plenty of families who at least partially make their income by providing food to other islanders, restaurants and visitors. Guanabana / Soursop growing at a family home in the Galapagos Islands

A typical weekend for someone from the Galapagos may be spent at the beach or at their farm in the highlands. Bananas and oranges are very plentiful, with oranges being in over abundance during peak season. Avocados, papaya and guava are also quite commonly grown on farms, while others may have more obscure fruits growing such as guanabana (soursop), tropical plum and rose apples. Tomatoes, onions and hot peppers are also very common in the Galapagos.

Agriculture in the Galapagos was once more or less uncontrolled and invasive species like mora (similar to blackberry/raspberry) and guava got out of control. Today, as with many things in the Galapagos islands, things are regulated quite well and locals are better educated on how to be a responsible farmer. Many types of plants and fruits are still banned from import if they pose a risk to endemic and native plants. Since the islands are 97% protected as a National Park, large farming machinery isn’t used and things like fertilizer and pesticides are banned. It may make it challenging to grow things in the islands, but the efforts are worth it – organic, delicious food! Tropical Plum fruit in the Galapagos

When it comes to meat and dairy, you can find locally farmed chicken and eggs that are fresh and pretty much as free-range, organic and healthy as you can get too. Milk and beef may be found at times too, although not nearly as plentiful. Want some herbs? Lemongrass is popular, while many other popular herbs are also available from local growers if you’re “in the know”.

Now, since this is the Galapagos Islands, we are not talking industrial or big commercial operations. We’re talking small, family owned gardens. At times there may simply be nobody in town offering chicken or eggs. The herb guy you discover might not show up for weeks. It is also a case where families are growing food for themselves first, and if they happen to have extra of something at a certain time of year then it may become available to buy locally in a store or market. It makes the visits to the markets extra fun as things can change quite a lot from week to week depending on what locals bring in, along with what has been shipped from the mainland that week. If a big holiday is coming up, such as Easter, then it can throw everything off too! It’s kind of a “buy local – when you can” situation in the Galapagos, but it is improving year after year. Chickens roaming around a house in the highlands in the Galapagos

At Galakiwi we buy local eggs and produce as much as we can, and provide our travelers with locally grown fruits and food from the farms owned by the families of people who work at Galakiwi, or from their relatives and families. It is one small way we reduce our carbon footprint and support the local economy.

When so much has to be flown into the islands already, why not take advantage of whatever local initiatives you can, right? Some hotels in the Galapagos have their own gardens as well, which cuts down on their need to supplement their menus with food from the mainland. Perhaps in the future more cruise ships, restaurants and other tour operators will adopt local buying practices as well, instead of offering foreign food and drinks, or importing everything from mainland Ecuador. We’re not perfect by any means, as some items we like, such as energy bars, aren’t made in the islands, but perhaps that is a business opportunity for some family to start up that we can support? Galapagos Oranges – not yet ripe, but soon…

Of course we can’t write a post on what is grown in the Galapagos without mentioning coffee. We’ll be conducting a taste-taste in the future to rate the various coffee bean options from the Galapagos, since it is the main export from the islands! If you’re looking for something stronger, then seek out some locally made cane sugar liquor too. Galapagos Coffee – One of the few exports from the islands

Watch for a future post highlighting some pictures from the local markets that are easier for visitors to get to and access some locally grown foodstuffs from the Galapagos Islands. Invasive Mora bushes in the Galapagos