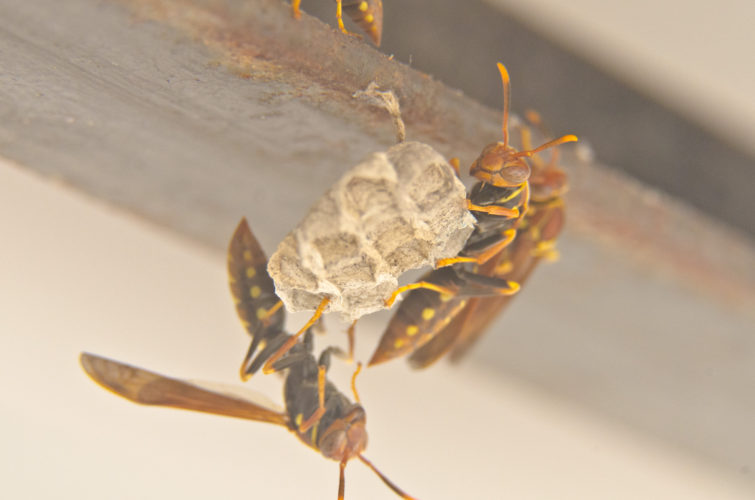 This is one invasive species that you probably won’t encounter in the Galapagos Islands, but should be aware of.

First recorded in the islands back in 1988, the yellow paper wasp (Polistes versicolor) has now spread across to all of the inhabited and main islands of the archipelago.

They are not as aggressive as hornets or “yellowjackets” that you may be familiar with at home, but can be aggressive if you venture to close to any nests. Residents and tourists have been stung, so if you have any allergies to wasp stings, be sure to let us know. If you will be visiting areas known to have wasp activity during your tour, your guide will advise you of proper precautions to take, some of which are listed below. Yellow Paper Wasps starting a Nest in the Galapagos

Quite possibly, you won’t see any such wasps, or may only come across a few as they buzz around doing their daily work to build up their nests. Chances of eradicating them from the Galapagos are next to impossible, so controlling their numbers and keeping them away from sensitive areas and popular tourist areas, is the main goal.

They have not had a detrimental impact on local wildlife, although they do complete with finches and other birds who eat small insects. They are more active in the lower coastal areas of the islands, which tend to be drier than the highlands, but are considered very widespread.

Safety Tips – Wasps in the Galapagos

The main tip is to avoid wearing very bright colors that may attract the wasps. Bright yellow as well as orange or red are not the best colors to wear if you will be hiking around any known wasp areas. Earthy, natural colors are best – brown, grey, dark green type of colors.

A Wasp Trap at the Giant Tortoise Breeding Centre

If you do see a wasp nest, do not approach it. Go around and give the wasps as much space as you can.

Stay alert in areas that are known to have wasps. You’ll likely see hanging wasp traps, or plastic yellow containers, which are a sign that you’re in an active wasp area.

A couple areas where wasp activity is very common are the hiking trail to Tortuga Bay on Santa Cruz Island and the Giant Tortoise Breeding Centre on Isabela Island.

We just finished a Galapagos tour, June 2019. There are TONS of wasps on Floreana, Santa Cruz and Fernandina. They are Everywhere. I spoke to people that had visited Galapagos before and they said they did not remember there being wasps back in the late 80’s or early 90’s. Definitely take the advice about not wearing bright clothes. Also, when THEY land on you, do not swat, just be calm and they’ll go away…. for the most part… Several people in our group were stung.