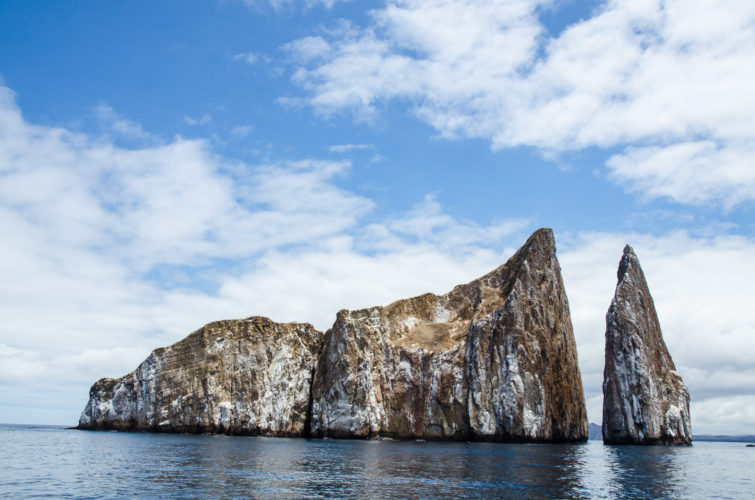 Near the end of any tour, people often begin to reminisce about their travels in the Galapagos Islands.

Inevitably the question comes up “what was your favorite activity?” Most people find it hard to pick just one experience, and many people end up listing a few activities that they loved. But that sleeping lion rock off of the coast of San Cristobal Island perhaps gets mentioned more than any other activity.

Leon Dormido / Kicker Rock is usually the very first or very last snorkel activity we include on our tours and it has a way of delivering a snorkel experience unlike anywhere else in the entire Galapagos Islands. Known as a tuff cone, Kicker Rock is composed of compacted volcanic ash, not rock. It towers up almost 500ft / 150m from the ocean floor, splitting into two above surface structures. Home to many birds, you’ll often spot Nazca boobies, blue-footed boobies, frigatebirds and tropicbirds. As exciting as that is, it is the underwater world that makes Kicker Rock so memorable. First off, its location is ideal. This is a “deep sea” snorkel experience as you’re out in the Pacific Ocean, with potentially strong currents to deal with. Not your typical calm beach snorkel experience. Why should you be excited about this? Because the currents and ocean depth here come into contact with a sudden, solid structure, you get great conditions for nutrient-rich waters close to the surface, which attract hungry sea life. for lack of a better term, Kicker Rock is a real ‘hot spot’ for underwater wildlife! Fish, Rays, Sharks! Why Kicker Rock is the best snorkel spot in the Galapagos.

Now, if you’re a novice snorkeler, don’t be scared – the hungry sea life isn’t after you. They’re after the little krill and fish and other tiny sea creatures that sea lions, sharks, turtles and rays find delicious. This is the ideal place to just take it slow and look for large groups of rays and sharks. Spotted eagle rays are the most common here, and sometimes dozens of them will glide by almost within reaching distance. Galapagos sharks are also extremely common in the channel, as are white-tipped reef sharks. We pretty much always see 5-10 sharks during a Kicker Rock snorkel trip, but with great conditions we’ve had the pleasure of snorkelling with 60+ sharks in the channel!

How about Hammerhead Sharks at Kicker Rock?

You bet! While not nearly as common as some other shark species at Kicker Rock, the hammers do like to hang out here. They tend to stay further below the surface, sometimes out of sight, so divers spot them more often than snorkellers. Once outside of the relatively calm waters of the channel, there are a couple of areas where surges create bubbly, rough and agitated sea conditions. These are great spots to hang out and perhaps try and catch a glimpse of other sharks, including hammerheads. With a good guide checking the area and free diving down to see what is swimming below, your hammerhead spotting chances will be improved. Snorkeling with Sharks at Kicker Rock with Galakiwi

Of course it also happens that the playful sea lions enjoy these areas of Kicker Rock too! That can make your shark spotting a bit challenging when there is a playful and curious sea lion zooming around you. Not exactly a bad distraction though, is it?

Surprises away from Kicker Rock

A third reason to make a Kicker Rock snorkel trip a must on your Galapagos adventure, is the actual boat trip to/from Kicker Rock. While Kicker Rock can be seen from lookouts near Puerto Baquerizo Moreno, it is far enough away that you may often come across other transient ocean wildlife near Kicker Rock. We’ve been lucky to come across everything from pods of dolphins and mating sea turtles to pods of killer whales and even whale sharks on our trips out to Kicker Rock! We consider Kicker Rock / Leon Dormido an essential inclusion to any great Galapagos tour. If you’re curious to see more, many of our snorkel videos on YouTube are from Kicker Rock, check them out!