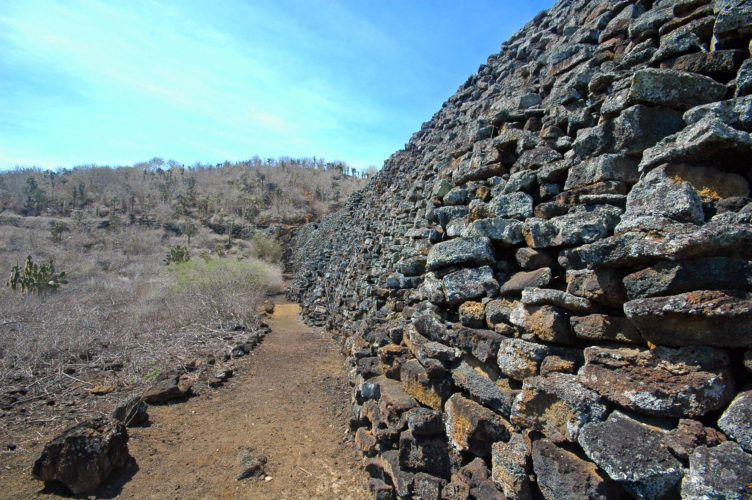 Known in Spanish as El Muro de las Lágrimas, the Wall of Tears is one of the most important historic sites in the Galapagos Islands.

There is a rich, and interesting human history to the Galapagos Islands that often gets overshadowed by the amazing wildlife, so we highly encourage travelers to visit some of the more historic sites around the islands, such as the Wall of Tears. Found on Isabela Island, you can access the Wall of Tears by a sandy path, which turns to rough gravel, snaking along close to the shoreline, just outside of Puerto Villamil. There are many lookouts, beaches, mangroves and other attractions along the way, but we’ll cover those in another post!

Reaching the Wall of Tears

The best way to get to the Wall of Tears is to rent a bicycle from one of the many shops in Puerto Villamil. You could walk there, but it is actually a bit far from town, taking roughly 2 hours each way if talking, or 1 hour each way if riding a bike. Because the road/path is a bit rough in spots, and sensitive wildlife such as tortoises may be spotted along the way, taxis are usually no longer allowed to bring people to the Wall of Tears.

As the path is mostly coastal, it is fairly flat, but there are a few decent inclines along the way. Most people consider the return ride / walk a bit easier, just be sure to bring plenty of water with you, as well as sunscreen and perhaps a snack as it can get very hot along the path, and at the wall.

Depending on the time of year you visit, there may be lush green vegetation along the way, and around the wall, or it may be a more brown, dry experience as in most of the photos in this post. As this is an independent activity that you can do on your own during free time, you usually will not have a guide with you. This means you need to be extra careful when visiting the Wall of Tears, especially if riding a bike there. Things to watch out for include pot holes and soft sandy stretches along the path there, which can make biking a challenge at times.  You’ll also want to stick to the paths, as there are plenty of prickly cactus and sharp lava rocks around that can quickly do some damage. At the Wall of Tears

Who Built the Wall of Tears?

The history of the Wall of Tears is not a nice one. The wall was built over 14 years back in the 1940s and 1950s by prisoners who were sent to Isabela Island. The establishment of a penal colony here was an easy choice for authorities as they knew it was virtually impossible for anyone to escape from the remote island. As for the wall itself, it was built by the inmates by hand.

Out in the sweltering heat they would collect the heavy, sharp lava rocks from around the island and place them along the wall. Some people say the wall was never finished, as it was meant to be a wall that would surround the actual prison area. But, it is more likely that this was simply a make work project as punishment to those sent here. No real purpose to create this tall, long wall in the middle of nowhere, other than to make the prisoners suffer. Steps to the top of the Wall of Tears

It is said that the Wall of Tears took the lives of thousands of prisoners. Injuries, accidents, exposure and poor treatment led to the death of many people here. Otherwise hardy, tough, rough men were broken down and weakened here. This is how the Wall of Tears gets it’s name, from the crying and sacrifices of the people who were forced to build it.

Is The Wall of Tears Haunted?

Eventually the wall was stopped and Puerto Villamil became a sleepy, peaceful town. Families and relatives of some of the people who worked on the wall still live on the island. To many locals they believe the Wall of tears is a haunted place. To go near the wall they say you can hear the wailing and crying of those who perished during it’s construction. Surely, it is a place of powerful energy having played such a torturous role in the human history of Isabela Island. View from the top of The Wall of Tears

Sure, it is just a wall of lava rocks. Sure, it wasn’t ever completed. But as you stand below, or atop the wall, try and picture hundreds of men working to create this wall and the conditions that they must have had to endure.