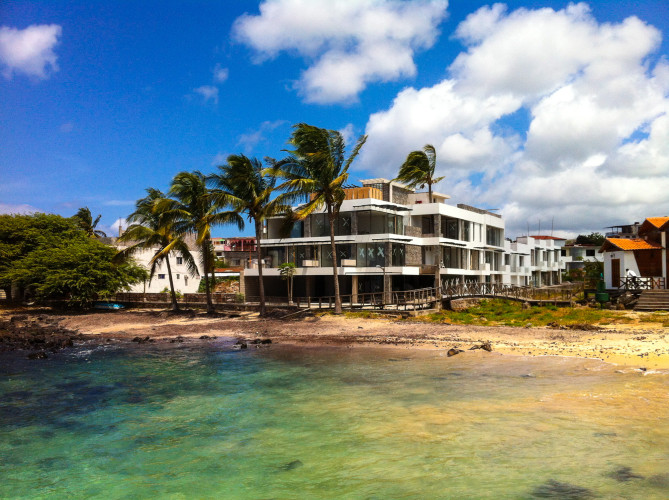 The Galakiwi team took a tour around Golden Bay Hotel recently, on the waterfront in Puerto Baquerizo Moreno.

From what we could tell, this hotel has been carefully planned out, and should be a great addition for people looking for more comfortable, upgraded accommodation on San Cristobal Island. Golden Bay hotel in the Galapagos

The view from the suites will be unbeatable, overlooking Playa Oro (which makes the hotel name make sense now, right?). The standard rooms at the hotel all seemed to be spacious and well planned out, while the waterfront rooms are quite impressive, with ample amenities.

A rooftop lounging area with jacuzzi massage tubs, a dedicated kids play room, a pool and restaurant round out the complete package for this new hotel.

Construction is moving fast, but still has a way to go. They planned to open before the end of 2015, but with some materials still being shipped from overseas we think it will be spring 2016 before everything is ready for visitors at Golden Bay Hotel. View from the rooftop at Golden Bay

The new hotel is being built where the old (closed for many years now) Orca Hotel existed.