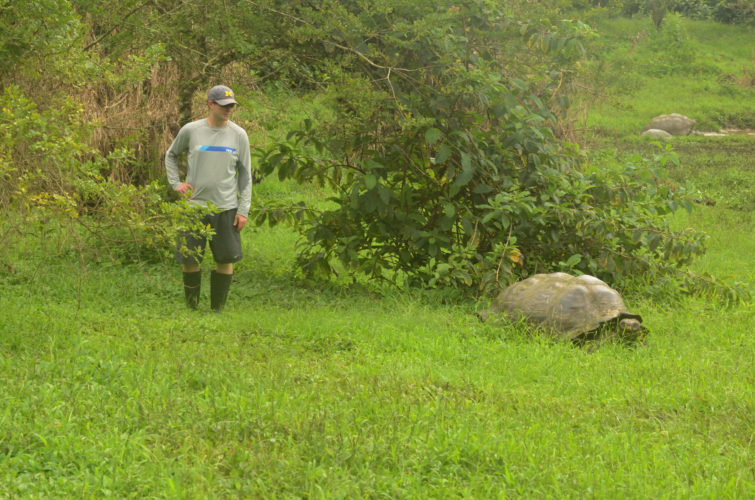 The most iconic animal of the Galapagos Islands is the Giant Tortoise.

These giant creatures spend all of their time on land, often preferring the more lush climate conditions found in the highlands, and around volcanoes, of various Galapagos Islands.

Some have adapted better to drier conditions than others, resulting in the different shell shapes you can notice when seeing different species in the same area at some of the research centres in the islands. See that blob in the distance? That is a Giant Tortoise in its Natural Habitat in the Highlands of Santa Cruz Island

Sadly, multiple Galapagos tortoise species have gone extinct, and others are threatened today. This is why breeding centres and research centres are so important in the Galapagos, to help re-populate areas that have been devastated by feral animals, such as goats, cats, rats and pigs.

Spotting Galapagos giant tortoises in the wild is a real treat, and a rare experience. The habitat of virtually all of the wild tortoises is off limits to visitors, with a couple of exceptions.

Where to see Wild Galapagos Tortoises

On Santa Cruz Island, there are numerous farms in the highlands that are home to free-ranging giant tortoises. These tortoises are monitored, but are free to go anywhere they want. Of course the farms provide the ideal conditions where food is plentiful and finding a mate, when it is time, is relatively easy. Even though they could move around the island, they have little incentive to do so, because life is good where they are. A Wild Tortoise taking a Mud Bath, something you can see at farms/ranches like Primicias or Manzanillo

The El Chato Reserve is a visitor site that can be accessed on Santa Cruz island to view wild giant tortoises on your own. Accessible from Santa Rosa, on the outskirts of Puerto Ayora, the trails here are often overgrown, slippery and potentially dangerous. Visitors have gotten lost here, with one fatality. While you can go on your own, ask around for advice on trail conditions, or hire a guide for safety. Cerro Chato and La Caseta are the two distinct areas here, with Chato having much better marked trails. Occasionally, La Caseta is closed to the public as rangers still hunt pigs and do work in the area.

Outside of these farms and reserves, there is a wild tortoise population on San Cristobal Island that is infrequently visited by tourists. This Galapaguera Natural is near the northern tip of the island, far from Puerto Baquerizo Moreno and well beyond Punta Pitt. Only accessible by boat, it requires a 6mile / 10km round trip hike. Compared to the walks that cruise boat travelers take, this is considered quite challenging.

The reward for adventurous travelers who may find a boat to take them here on a day trip, is that it is rarely visited and provides a great environment to see tortoises. You may come across some other native, and introduced, species on this trail too, which are not commonly seen on organised tours, such as a gecko endemic to San Cristobal island. Be warned though, invasive wasps are prevalent here. In recent years there were also sightings of a wild tortoise on the hiking trail to Sierra Negra Volcano on Isabela Island, but that tortoise was relocated by park authorities…we can always hope that another one makes its way there though!

Finally, if you happen to have scientific research or other special credentials or interests beyond tourism, there are wild giant tortoises at Alcedo Volcano on Isabela Island. The area is extremely fragile and vulnerable and generally only park rangers visit this site to check on the health of the giant tortoise population. This is a restricted site, meaning no tours go here and a lengthy application process must be completed, and anyone visiting the site must also go through a quarantine. A private boat must be chartered to get to the access point. The hike to the caldera is steep, through difficult terrain and there are no facilities, just two basic rest stops along the 8.5mile / 14km trek, which can take all day.

Where to see Captive Giant Tortoises in the Galapagos Islands

Away from those farms in the highlands, the most famous place to see Giant Tortoises in the Galapagos is at the Charles Darwin Research Station in Puerto Ayora. The actual name of the tortoise area here is the “Fausto Llerena” Breeding Center, named after the Galapagos National Park ranger who cared for Lonesome George. Going by the name Don Fausto, he dedicated 43 years of his life towards the conservation efforts of the Galapagos Islands! This facility is located on the edge of town, about a 15 minute walk from most hotels or the pier. You’ll find an impressive complex of tortoise pens that provide an educational experience about the different species of tortoises in the Galapagos, where they come from, and why giant tortoise research is so important. This is where Lonesome George called home, and it is where you can find Super Diego, who currently reigns supreme as the most famous tortoise of the islands.

This is the best place in the Galapagos to view numerous different species and see how their tortoise shell shapes have evolved differently to match the terrain and vegetation of the islands they are native to.

When Pepe “The Missionary” died in 2014, it meant that San Cristobal no longer had a giant tortoise easily viewable in town.

Not to worry though, as Galapaguera de Cerro Colorado is home to a number of tortoises that roam around an area that provides them with natural vegetation and water. Similar to the tortoise breeding and research centres on other islands, but without any crowds, this is a great place to go if you are a serious photographer. Because it is located about 13miles / 22km from town, a taxi ride is required to get here. This means far fewer people visit here and you’re able to sit and enjoy the animals and make sure you get the best photos (or videos!) possible. The facilities here are pretty limited, so don’t expect anything fancy – but you’re here for the tortoises anyways, right?

If lucky, you can try to set up a tour to boat / hike into the wild tortoise area, however tours are infrequent.

Set up in the highlands, about 5miles / 8km inland, you’ll find a corral that is home to a selection of giant tortoises at a place called Asilo de la Paz. Nearby are the pirate caves, which played a vital role in the early days of human habitation of the island. The tortoises here are for educational purposes (for school children on the island as well as tourists), there is no breeding or research program set up here. You can kind of think of these tortoises, which are from various islands, as being retired.

At the Breeding Center “Arnaldo Tupiza”, you’ll get up close to tiny giants and giant giants! Here you will come across everything from little Galapagos tortoises that are only months old, to full grown adults who are here to reproduce and help increase populations in the wild.

This center can be a bit more hands on, with some GNP rangers showing you unhatched eggs and embryos, or even days-old tortoises that may have just hatched. Focused particularly on Isabela Island species, you will notice a remarkable difference in shapes of shells between tortoises even from this same island. Each volcano on the island has at least one of its own unique species of tortoise here!

In the case of the Cerro Paloma population, their survival is based on the breeding program here which comprised of only a handful of individuals and one fertile female! Thankfully, the programs are successful and numbers are increasing for all of these threatened species.

So there you have the complete recap of tortoise spotting in the Galapagos Islands. Now you just need to decide how to get to these tortoise places, might we suggest our 10-day Galapagos Adventure, which happens to bring you to a lot of these great Galapagos sites?

Would love to see these beautiful creatures.